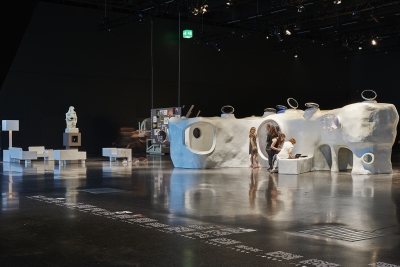 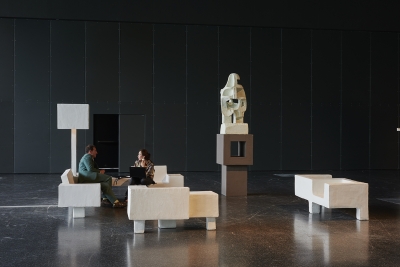 Atelier Van Lieshout’s The Original Dwelling is simultaneously a luxurious hang-out and imaginary tribal dwelling; the work takes humankind back to its origins, recalling a primitive state of being.

The Original Dwelling is part of the ongoing series New Tribal Labyrinth which presents a vision of a future - yet primitive - world inhabited by imaginary tribes. AVL’s cave-like structures fit into a long tradition of troglodyte cave dwellings, which have housed humanity for centuries. The structure is at the same time contemporary, idealistic, as well as primeval, making it “The Original Dwelling” in every sense of the word.

The Original Dwelling’s appearance is dictated from the inside out. The interior spaces look like they were hewn out of stone, sculpted around one’s personal wishes and fantasies - an inverted example wherein “Function follows Form”. The Original Dwelling makes a link with the Modernist Movement, but its organic shapes and primitive production methods challenge Modernism.

The approximately 10 x 7m functional sculpture is a hybrid cave-dwelling and pool house which comprises a bedroom, a playroom, a bar, a lounge and a dressing room. Indoor spaces are lit by windows, skylights and alternative moodlighting. Joep van Lieshout has also created an accompanying body of sculptures which can double as outdoor lounge furniture in the style that he refers to as "nouveau brutalism”.